Barriers to education for young people with ASD

The National Autistic Society estimates that 1 in 100 people are autistic, they described autism as “ a lifelong, developmental disability that affects how a person communicates with and relates to other people, and how they experience the world around them.” (1)

I undertook a self selecting survey in early 2019, that was shared on social media and received 421 respondents, 76% had an official diagnosis of ASD. The survey was called “Autism and accessing education” and classified a young person as anyone under 25 who identifies as ASD.

Pie Chart Are you diagnosed ASD?

0.5% Worried/scared to ask for an assessment

Piechart “ Where are you currently receiving an education?”

Only 30% of the respondents have (or had) an EHCP in place to assist their education, an EHCP is an Educational Health Care Plan. The government describes it as

“An education, health and care (EHC) plan is for children and young people aged up to 25 who need more support than is available through special educational needs support.

EHC plans identify educational, health and social needs and set out the additional support to meet those needs.” (2)

A worrying 11% had been refused an EHCP, of those refused the vast majority are still in mainstream, but the amount with no education increases to 11% 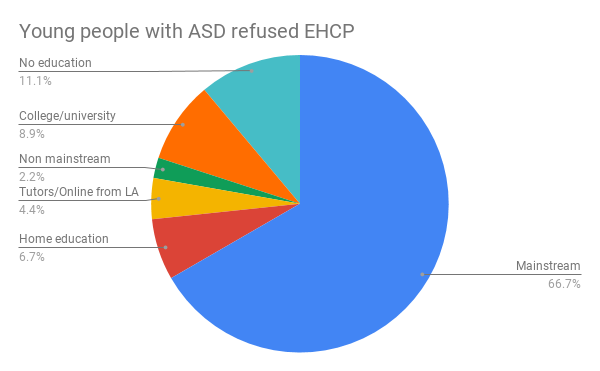 The majority of those refused an EHCP have an official NHS diagnosis of ASD and only 2.2% (1 respondent) had been refused an assessment for ASD.

Pie chart “Diagnosis of young people who were refused EHCP”

Refused/did not make criteria for assessment 2.2% 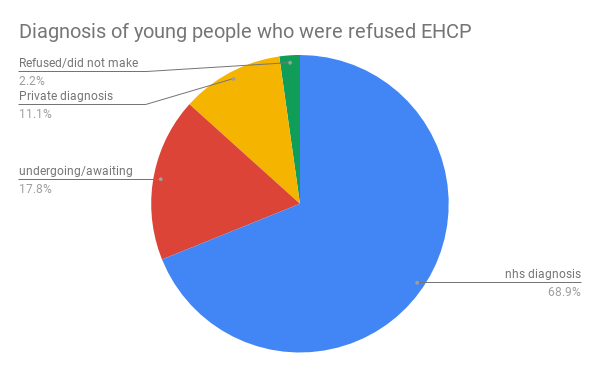 School refusal is a massive problem for young people, Young Mind describe it as

“When children completely refuse to go to school, extreme fear and anxiety often a big reason why. This is why school refusal is also known as ‘school phobia’. Your child might be feeling overwhelmed with anxiety about schoolwork, relationships with friends or teachers. They might have low self-esteem, or be experiencing bullying and feel too afraid to talk about it.

Your child might be worried about things going at home, like a big life change, family breakdown mental illness or bereavement. This sort of life event can increase their worry that bad things will happen at home, while they are at school.

School refusal is usually accompanied by tantrums, physical complaints such as stomach aches, headaches, vomiting, rapid heartbeat, dizziness, pleading or begging to stay at home and even threatening to harm themselves if you make them go to school.” (3)

Not Fine in School describe it as a struggle with school attendance that “may be due to unmet Special Educational Needs & Disabilities (diagnosed or suspected), bullying, trauma, physical illness or excessive anxiety. School attendance difficulties are often poorly understood, are compounded by current challenges within the education system, and can have severe consequences for both child and family.“ (4)

64% of respondents were a “school refuser” at some point, the 30% refused an EHCP may contribute to this figure, given that NFIS identify that unmet SEND can cause or compound school refusal issues.

Pie Chart “Are you/have you been a “school refuser”?

Out of those 63.6% who said they were a school refuser, only 31.6% had an EHCP in place at some point and 12% had been refused an EHCP. However 31.6% had an EHCp in place and were school refusing, so even if autistic young people manage to get an EHCP, it doesn’t seem to fully meet their needs. 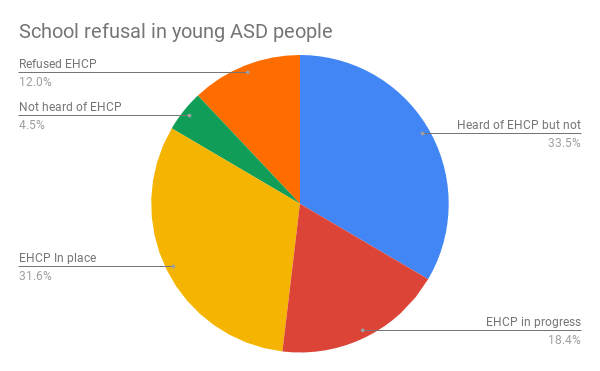 Had time off but not threatened with prosecution or Children's Services 46.4%

Yes, threatened with prosecution due to school refusal 28.3% 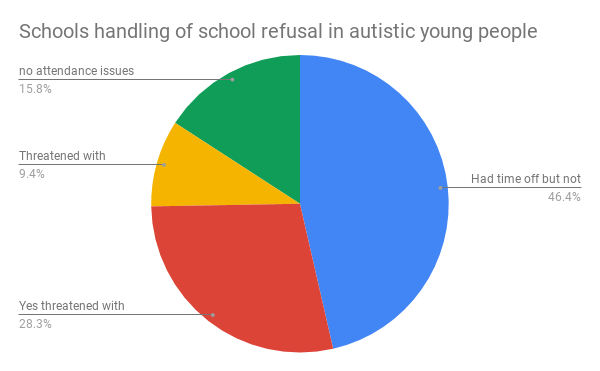 Going forward, many school refusers become home educated, mostly due to the lack of support in the school system and threats of prosecution and Children's Services involvement. This bullying is just another form of off rolling, where students that are not good for statistics are forced out of schools to improve the overall school statistics.