Dismissal of young people with ME by NHS professionals

I undertook a self selecting survey about NHS care for children and young people with ME and received 151 responses. I am particularly interested in this at this time due to the Parliament debate on ME this January (2019)

My last article Policy funnels families into unwarranted child abuse shows how refusal to force a child to undertake Graded Exercise or failure of the child to *improve* whilst doing this dangerous and debunked therapy, leads directly to child protection and false allegations of fabricated and induced illness. Clearly, young people with ME are coerced into doing Graded Exercise Therapy, regardless of the wording of the NICE guidelines. Steve Brine quoted these guidelines and the fact that they clearly say that a patient can refuse

treatment and that this refusal will not affect their ongoing care, to dismiss this very real problem of abuse of people with ME. However, we can see that unwarranted and false child abuse investigations are used in order to coerce GET engagement.

GET is the idea that increasing exercise by 10% every other week can cure you of ME/CFS, a condition that is characterised by Post Exertional Fatigue, that is, any exercise causes a massive increase in fatigue and other symptoms and/or an exacerbation or "crash".  Despite the study behind GET being debunked, it remains in the NICE guidelines and the vast majority of those surveys had been prescribed GET. The NICE guidelines are now under review, however NICE have refused to remove GET from their recommendations in the mean time, stating that patients have the right to refuse.

Of those that were offered GET, 59% refused and of those 22% were referred to children's services for either Fabricated and Induced Illness, Neglect or Emotional Abuse for refusing GET for, or on behalf of their child.

Just a reminder that this is a therapy that is debunked and has shown in further studies by the ME Association to actually harm people with ME.

Many felt that their refusal to do GET and CBT affected their care, despite it being stipulated in the NICE guidelines that this should not happen

​The affects of GET on the ME population was first raised in Parliament on 21st June 2018 and it was actually said that anyone prescribed GET after that date may be able to sue the NHS due to the knowledge in the public arena that GET harms patients and yet  GET continues to be prescribed.

Extremely worryingly, a very high amount of young people have been told by a NHS health care professional that they "Don't believe in ME"

Pie chart "Have you ever been told by an NHS medical professionals that they "Don't believe in ME"? 150 responses 58% No 42% Yes

Children and young people with ME are going to struggle to  access any services when they are openly told by professionals that a condition recognised by NICE and WHO isn't real. This shows a massive amount of unprofessional conduct where NHS workers think that they are right to voice their personal prejudice towards a sick and vulnerable child or young person.

Another common phrase heard in ME circles is "Everyone gets tired", I don't know of a single phrase that is so hurtful and dismissive when uttered to a child struggling with a condition that has been shown to have a worse quality of life than those with cancer.

“ME/CFS is as disabling and has a greater impact on functional status and well-being than other chronic diseases such as cancer. The emotional burden of ME/CFS is felt by lay carers as well as by people with ME/CFS.” Nacul et al (2011a) ​ The scary thing is that many NHS professionals seem to think that this is a phrase which it is totally reasonable to say to a child with ME

Ironic, that the parents of these sick children are being referred to Children's Services for abuse, neglect and emotional abuse, when such blatantly abusive phrases are coming from the professionals that they go to for help.  Most Children's services do not recognise ME/CFS as a disability and very few children are referred for support. Most who are referred are for false allegations of fabricated or induced illness, neglect/abuse due to the child having ME (which we have shown are due to refusing GET) and low school attendance.

Out of those surveyed, 27% were offered no medication to help deal with the horrific symptoms of ME/CFS

The NICE guidelines specify that ME/CFS diagnosis should be made only when after other possible diagnoses have been excluded and symptoms have persisted for more than 3 months (4 months in adults). The vast majority, 92% had blood tests before being diagnosed, but only 24% had ct head and 5% had sleep clinic. Of the respondents, 63% were diagnosed after blood tests only.

Once a diagnosis of ME is made, despite the professional attitudes that they either "don't believe" in ME or seem to think its *just* feeling a bit tired, many young people find other symptoms and conditions are dismissed as relating to ME. Indeed a low but significant percentage reported injuries being dismissed as ME/CFS. ​ Bar Chart "Have any other illness/injury and or symptom that isn't ME been dismissed as related to ME?" 146 responses 26.7% Yes another illness, 20.5% Yes other symptom from something else, 3.4% Yes from injury, 57.5% No ​ 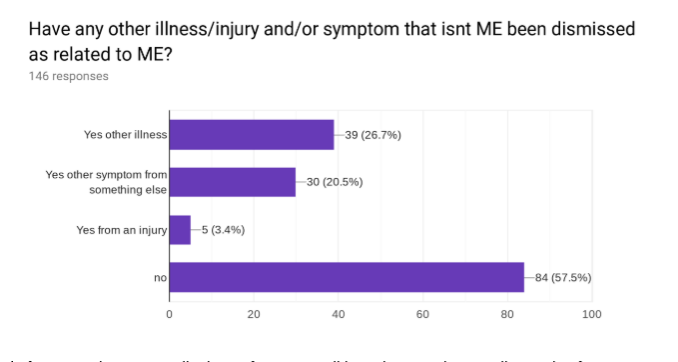 In fact, securing any medical care for any condition when you have a diagnosis of ME/CFS becomes increasingly difficult, with young people with ME/CFS reporting they are refused referrals for other conditions. 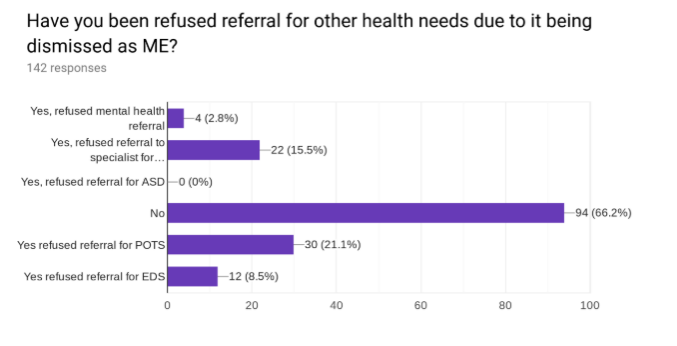 This is the paradox of NHS treatment for ME, where ME/CFS is dismissed as "in your head" "not real" "Many Excuses" "everyone gets tired" while at the same time responsible for any and all conditions or symptoms that patient may present with, including, rather ridiculously, any injury they may present with.  The NHS and NICE has a very long way to go to win back the trust and respect of people with ME and their families.

I will be sending this information to Steve Brine and my local MP and can only hope that they don't dismiss the plight of people with ME.

Update: Steven Brine has quit due to other matters, but I'm still hopeful that we will receive a response from his replacement when they are appointed